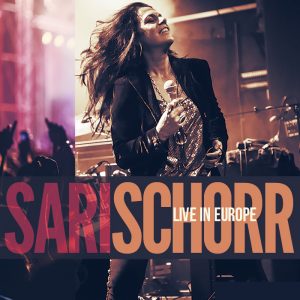 Sari Schorr ‘Live In Europe’ will be out on Manhaton Records on 6th March 2020, followed by her biggest European tour yet, comprising over 32 dates across the continent and the UK in March and April.

In her own words: “The time had come for me to get a bit messy. Too much of my life was becoming cleaned-up in the carefully curated world of social -media where we retouch our faces and bodies and carefully edit our words. Recording a live album was a blunt attempt to fend off the perfectionism of the technological world,” says Sari.

Every year there is seemingly a constant parade of must-hear singers right? Not really. They come along rarely if they’re the real deal, as rarely as a seminal live album actually. Meet Sari Schorr. What makes her different is what makes all the others the same. She’s got talent, who hasn’t, but she has depth, life experience (like helping out in Haiti after the earthquake). She has real stories to tell. Sari is one of the few singers that can be, and is, mentioned in the same breath as Joplin. What you get is Blues with 3 Michelin Stars served in a New York diner. Don’t forget to leave a tip!

Sari’s brand-new, 12-track live album was recorded on the last tour, and serves as a perfect illustration of why you’ll want to catch the next one. We are treated to the passion of original songs from her two studio albums and two reworked covers, Black Betty and I Just Want To Make Love To You, both hot favourites with audiences. These stunning live recordings from across Europe, along with two previously-unreleased acoustic tracks recorded for the BBC in the UK, truly make this album an object of desire. For Sari “there is an honestly in a live performance that allows me to be vulnerable and uncensored.”

We are in uncharted territory, and to use superlatives that have been wrongly applied to lesser performers in the past, mostly by ad agencies, would be to cheapen something exceptional. Perhaps the best words are actually the names of other exceptional artists Sari stands alongside, like Tina Turner, Elkie Brooks and the already mentioned Janice Joplin.

“Sari’s songwriting reflects human emotions and experience, adding to the feeling of intimacy with her audience. She speaks of her commitment to tackle difficult subjects in her songwriting often considered taboo, such as domestic abuse and heroin addiction, offering a different perspective on topics of which no one wants to talk”. – National Rock Review -Sonia Alani